Congratulations to Coach King and our Track & Field Team! 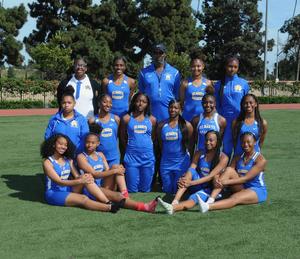 Congratulations to Coach King for being inducted into the Arcadia Invitational Hall of Fame! “When it comes to boasting top girls track and field programs, California takes a back seat to no one! But while the likes of Long Beach Poly, James Logan, and Long Beach Wilson have long been a national force for years, one of the Golden State’s most successful programs has been a well respected unit considered among the finest small-schools programs in America. Under the guidance of Coach King, St. Mary’s Academy has more than held its own against the region’s top programs while racking up a series of sectional team crowns, riding the success of its relay units and triple jumpers to a dynasty of sorts! Coach King has always been a model coach not only to his athletes, but to his peer brethren as well. Seemingly easy-going yet firm, he has struck the perfect balance in elevating St. Mary’s Academy to great heights!”